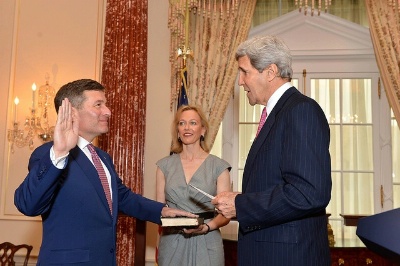 One of the best parts of this job is swearing in the talented men and women who serve our country. That’s especially true when I can celebrate old friends like Charlie Rivkin. In 2004, we became fast friends at his lovely home in Santa Monica. Charlie also hosted me in Paris many times over my first year as Secretary. Charlie was so devoted to that post that he stayed behind after Susan and the kids left the country.

But they are reunited now so let me start by welcoming Susan, and their many family members and friends who have come from all over the U.S. I know you must all be very proud. Ambassador Westmacott of the U.K. and Ambassador Delattre of France are also here, as is Mohammed Jaham Al-Kuwari from Qatar. Thank you all for coming.

Now, I say it all the time, but economic policy is foreign policy. I stressed that just last month when we had all of our chiefs of mission here in Washington and when I testified before Congress about the State Department’s budget. So as Assistant Secretary of State for Economic and Business Affairs, Charlie will be part of a great team working to answer some very important questions for us – like how can we build a vision of shared prosperity for the 21st century? As a nation, we have to do a better job of expanding economic opportunity so it reaches across the globe. Shared prosperity – that’s a big vision that I want to grow into a big reality. And Charlie is responsible for renewing that commitment.

Charlie’s job is demanding. He has to coordinate with agencies across the Federal Government; promote our business interests across the globe; and manage everything from telecommunications to economic sanctions. There are so many moving parts. It’s a lot like running a business, which is why Charlie is a perfect fit.

Now, some businessmen cut their teeth on Wall Street. Others in Silicon Valley. Charlie, here, did it in Hollywood. Indeed, Jim Henson, the creative genius himself, saw promise in Charlie and brought him into children’s television. He recognized Charlie’s unique ability to take a creative vision and shape it into reality. And by the time Charlie left the Jim Henson Company, he had become CEO and helped turn Henson’s creative spark into a $1 billion industry titan. Over the years Charlie was responsible for popular shows like “Sesame Street,” “The Muppet Show,” and “Yo Gabba! Gabba!” Put another way, Charlie’s career is the envy of eight-year-olds everywhere.

But what makes Charlie a great public servant is his creativity. When Charlie arrived in Paris as our ambassador to France, he wanted to make an immediate impact. So he built the first-ever fleet of electric cars at a U.S. Embassy. Then he founded the Washburne Awards to celebrate innovation and diversity at the mission. Charlie also set about learning from the French – especially young people. On a trip to a disadvantaged community called Seine-Saint-Denis, he asked local students what they liked about America. They said Samuel L. Jackson and Will.i.am. So Charlie brought Sam Jackson to Bondy – one of Paris’ roughest neighborhoods, or banlieus. Then he persuaded Will.i.am to play a free concert. You see, Charlie understands that diplomacy is about more than trade pacts and ministerials. It’s about reaching real people and connecting with them. It’s about breaking through where the idioms of traditional diplomacy cannot.

But Paris wasn’t all work and no play, I’m sure. Susan, Charlie: I know it must have been bittersweet to leave – with the long walks on the Seine’s Left Bank, the soufflés at Le Cigale Recamier, and those oysters from Brittany. Unfortunately, Washington isn’t quite so romantic these days.

Back home now, Charlie is giving more of his life to public service. But that’s no surprise. The State Department is stamped into his DNA. You see, Charlie is the son of one of our finest ambassadors, Bill Rivkin. Ask any Foreign Service Officer who knew Bill, or knows our history, and they will light up. They will speak in reverent tones. He was one of those rare men who could move effortlessly between the ancient capitals of Europe and the budding republics of West Africa, telling America’s story. And although his life was cut tragically short, Bill’s legacy lives on today. Each year, the Department remembers his service with the William R. Rivkin Award given to a Foreign Service Officer who exhibits the same “intellectual courage” and “independent thought” that made Bill such an extraordinary diplomat.

As some of you may know, Charlie keeps a black-and-white photo of his late father with President Kennedy hanging in his own office. Charlie says it serves as a daily inspiration to him and a reminder of his father’s legacy. Charlie – you are your father’s son. I see it echoed in your work. I see it in your devotion as a husband and a father. And I see it imprinted on your outstanding service to your country. If your dad were here today, he would be one of the proudest fathers to ever stand amongst these stone columns.

Now I’ll administer the oath of office. The very same oath your father took for the first time over half a century ago.