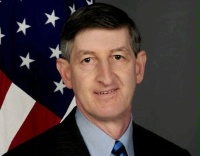 Jacob Walles is the Senior Adviser on Foreign Fighters in the Bureau of Counterterrorism and Countering Violent Extremism at the State Department. Previously, he served as the U.S. Ambassador to the Republic of Tunisia from July 2012 to September 2015. He also served as Deputy Assistant Secretary of State for Near Eastern Affairs, responsible for U.S. policy with respect to Egypt, Israel, Jordan, Syria, Lebanon and the Palestinians. For more than twenty years, he was an active participant in U.S. efforts to promote peace in the Middle East dating back to the 1991 Madrid Conference.

His previous assignments included service as U.S. Consul General and Chief of Mission in Jerusalem from July 2005 to August 2009. As Consul General, he conducted the official dialogue between the United States and the Palestinian leadership.

Mr. Walles also served as the Director of the Office of Israel and Palestinian Affairs from 1998 to 2001 and as Deputy Principal Officer at the U.S. Consulate General in Jerusalem from 1996-1998.

From September 2009 to June 2010, Mr. Walles was the Cyrus Vance Fellow for Diplomatic Studies at the Council on Foreign Relations.

Mr. Walles is a career member of the Senior Foreign Service with the rank of Minister Counselor. He is the recipient of Presidential Meritorious Rank Awards in 2007 and 2012, and the Department’s Superior Honor Award in 2001 and 1994 for his work in promoting peace in the Middle East.

Mr. Walles was born in Wilmington, Delaware and is a graduate of Wesleyan University and the School of Advanced International Studies of Johns Hopkins University.