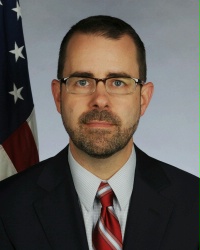 Knox Thames currently serves as the Special Advisor for Religious Minorities in the Near East and South / Central Asia at the U.S. Department of State in Washington, D.C. The first to serve in this capacity, he received a civil service appointment in September 2015 and leads State Department efforts to address the situation of religious minorities in these regions.

For over a decade and a half, Mr. Thames has worked in various U.S. government capacities, including at two different U.S. government foreign policy commissions, and is an expert on a range of international affairs issues, including human rights, religious freedom, counter extremism, and international organizations. His country expertise covers the Middle East and South and Central Asia. Before joining the State Department, he was the Director of Policy and Research at the U.S. Commission on International Religious Freedom. Prior to that, he served in the Office of International Religious Freedom at the State Department and was Counsel for six years at the U.S. Commission on Security and Cooperation in Europe (the Helsinki Commission). In addition, the U.S. Army War College appointed him as an Adjunct Professor from 2013-2016 and the State Department appointed him from 2004-2012 to the OSCE Panel of Experts on Freedom of Religion or Belief.

Mr. Thames holds a Bachelors of Arts from Georgetown College, a Juris Doctorate from American University’s Washington College of Law, and a Masters in International Affairs from American University’s School of International Service. He also studied at Jagiellonian University in Krakow, Poland. An author of numerous articles, his writing has been featured in the Yale Journal of International Affairs, ForeignPolicy.com, and Small Wars Journal. He has been interviewed by the Associated Press, Agence France Presse, the Christian Science Monitor, CNN, FOX News, and the Washington Post.