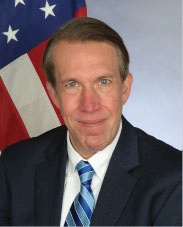 Coordinator for Cyber Issues
Term of Appointment: 02/22/2011 to present

Mr. Painter has been on the vanguard of cyber issues for over twenty five years. In his current role as the Coordinator for Cyber Issues, Mr. Painter coordinates and leads the United States’ diplomatic efforts to advance an open, interoperable, secure and reliable Internet and information infrastructure. He works closely with components across the Department, other agencies, the White House, the private sector and civil society to implement the U.S. International Strategy for Cyberspace and ensures that U.S. foreign policy positions on cross-cutting cyber issues are fully synchronized. These issues include promoting norms of responsible state behavior and cyber stability, advancing cybersecurity, fighting cybercrime, promoting multi-stakeholder Internet governance and advancing Internet freedom.

Mr. Painter and his team have launched “whole of government” cyber dialogues with numerous countries, designed and carried out regional capacity building initiatives, worked to reduce cyber threats worldwide by combatting operational threats such as Distributed Denial of Service and large-scale cyber intrusions for the purposes of stealing intellectual property and proprietary business information, worked to ensure that fundamental freedoms can be exercised online, and worked diplomatically to build a consensus around our vision of an open, interoperable, secure and reliable cyberspace. He and his team have also spearheaded the promotion of an international framework of cyber stability that includes building a consensus around norms of acceptable behavior and getting agreement on transparency and confidence-building measures designed to reduce the risk of miscalculation that could inadvertently lead to conflict in cyberspace.

Prior to joining the State Department, Mr. Painter served in the White House as Senior Director for Cyber Policy and Acting Cyber Coordinator in the National Security Council. During his two years at the White House, Mr. Painter was a senior member of the team that conducted the President's Cyberspace Policy Review and coordinated the development of the U.S. 2011 International Strategy for Cyberspace.

Mr. Painter began his federal career in 1991 as an Assistant U.S. Attorney in Los Angeles where he led some of the most high profile and significant cybercrime prosecutions in the country, including the prosecution of notorious computer hacker Kevin Mitnick. From 2001-2008 he helped lead the case and policy efforts of the Computer Crime and Intellectual Property Section in the U.S. Department of Justice and served, for a short time, as Deputy Assistant Director of the F.B.I.'s Cyber Division. During that period, he helped write the National Strategy to Secure Cyberspace (2003) and was a key member of the National Cyber Study Group that produced the Comprehensive National Cyber Initiative in 2007.

Mr. Painter is a recognized leader in international cyber issues. He has represented the United States in numerous international fora, including chairing the cutting edge G8 High Tech Crime Subgroup from 2002-2012. He has worked with dozens of foreign governments in bilateral meetings and has been a frequent spokesperson and presenter on cyber issues around the globe. He is a recipient of the prestigious RSA Award for Excellence in the Field of Public Policy (2016), the Attorney General’s Award for Exceptional Service (2002), the Intelligence Community Legal Award (2008) and has been named to the “Federal 100” list, among other honors. Mr. Painter is a graduate of Stanford Law School and Cornell University.