Share
The United States National Oceanic and Atmospheric Administration (NOAA) National Marine Fisheries Service (NMFS), conducted research during the 1970s and 1980s that suggested that sea turtle mortality caused by accidental drowning in mechanical shrimp trawls was a major factor in the decline of sea turtle populations worldwide. Driven by these findings, NOAA developed fishing gear technology, referred to as Turtle Excluder Devices (TEDs), that both allowed turtles to escape shrimp trawls and shrimpers to retain their catch.

Decades of refinement and thousands of sea tests have produced modern-standard TEDs that are 97 percent effective at excluding turtles and, with only very limited exceptions, all shrimp trawls in the United States must carry TEDs. Section 609 of United States Public Law 101-162 ("Section 609") enacted in 1989, provides that foreign-caught shrimp or products from shrimp harvested with commercial fishing 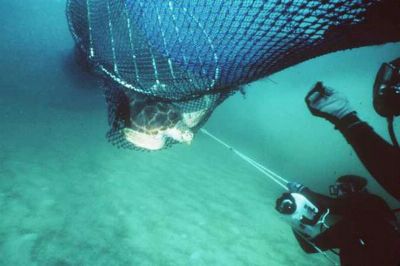 technology that may adversely affect protected sea turtles species, may not be imported into the United States unless the Department of State, acting on authority delegated by the President, certifies to Congress that export nations harvest under conditions that minimize impact on endangered turtle populations. All shrimp imports into the United States must be accompanied by a complete and signed form DS-2031.

Certification is based on one of three factors: 1) that a nation has taken specific measures to reduce the incidental taking of sea turtles in trawls, which usually involves implementing a TED program comparable in effectiveness to the United States program; 2) that shrimping occurs in cold waters where the risk of taking sea turtles is negligible; or 3) shrimping is done is a way, most often manually, that does not endanger sea turtles.

Certifications under 1) are made after verification visits by State Department/U.S. National Marine Fisheries Service personnel. The teams ensure that local legislation is in force requiring fisherman to use standard TEDs, and that the government effectively monitors compliance and enforces penalties for violations. To certify countries under parts 2) and 3), the Department of State relies on a wide range of information from a variety of sources, including from U.S. embassies. In 2010, 13 countries were certified pursuant to 1) and twenty five others and one economy were certified pursuant to 2) and 3).

Not all shrimp imported into the United States is trawl harvested; an increasing percentage comes from aquaculture. If the import is from a non-certified country, a government official must sign the DS-2031 form and attest that the shrimp was caught without endangering protected sea turtles.

All sea turtle species found in waters in and around the United States and its territories are either threatened or endangered with extinction. Some of the factors contributing to this status include incidental capture in fisheries, and habitat destruction and degradation.

In addition to their intrinsic value as contributors to biodiversity, sea turtles have biological and ecological value as they play an important role in marine and terrestrial ecosystems. In many countries sea turtles also have significant cultural importance and have come to represent economic value in terms of revenue generated by tourism and other form of sustainable utilization.

Due to the highly migratory nature of sea turtles, cooperative international efforts to protect and restore sea turtle populations and habitats are imperative. The Department works actively with the National Marine Fisheries Service and the U.S. Fish and Wildlife Service to promote sea turtle research, identify threats to sea turtles, and mitigate potentially harmful effects of human activities on these species. Such work is accomplished in part by participating in multilateral agreements such as the Inter-American Convention for the Protection and Conservation of Sea Turtles (IAC) and the South-East Asia Marine Turtle Memorandum of Understanding (IOSEA).

The IAC promotes the protection, conservation and recovery of sea turtles and the habitats on which they depend. Including the United States, there are currently 14 nations that participate in the IAC: Belize, Brazil, Chile, Costa Rica, Ecuador, Guatemala, Honduras, Mexico, the Netherlands Antilles, Panama, Peru, Uruguay and Venezuela. The IAC Parties are obligated by the Convention to adopt measures and engage in activities that are in accordance with the best available data and take into consideration the environmental, socioeconomic and cultural characteristics of the Parties to the Convention. Since the IAC came into force in 2001, Parties have adopted a variety of resolutions, including one on climate change and two related to the most endangered sea turtles species - the leatherback and hawksbill sea turtles. As the Convention approaches its 10 year anniversary, member States are reflecting both on the accomplishments of the IAC and what further actions are needed to enhance the protection and conservation of sea turtles.

The South-East Asia Marine Turtle Memorandum of Understanding (IOSEA) seeks to conserve and replenish depleted marine turtle populations in the Indian Ocean and South-East Asia region. The IOSEA focuses on capacity building to provide developing nations with the resources to successfully implement conservation and management measures for sea turtles. The IOSEA Secretariat has established a variety of free online resources such as an electronic library and interactive databases, which include information on sea turtle genetics, tagging programs and research and conservation projects. IOSEA recently hosted two workshops to discuss problems, solutions and the current state of knowledge regarding the impacts of fishing activities and coastal development on sea turtle populations in the region. IOSEA is also in the process of developing a site network to draw attention to habitats and sites that are vital to the IOSEA region’s sea turtle populations. As with the IAC, the United States provides financial support to the IOSEA, participates in the development of resolutions and assists the Secretariat in diplomatic outreach to other nations in the IOSEA region.